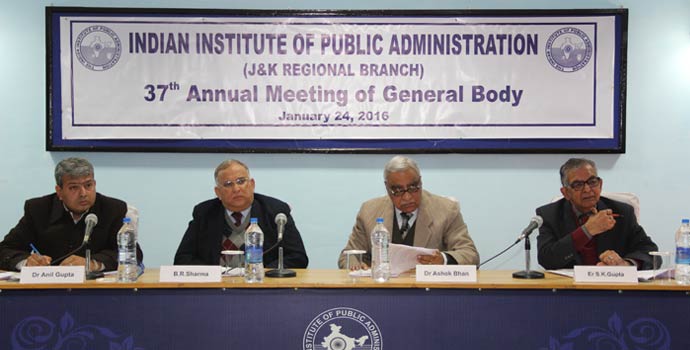 Dr Ashok Bhan will be the Patron and Shri B.R.Sharma, IAS was re elected as Chairman of the Branch for the period 2016-18 during the 37th Annual General Meeting of the Jammu and Kashmir Regional Branch of IIPA was held yesterday in Jammu.

Shri B.R.Sharma, IAS Chairman in his address said that the branch can take a lead role in undertaking collaborative work with the state government which can help in achieving the objectives of the branch. Dr. Ashok Bhan in his address emphasized on grooming the young talent which can bring in new ideas which are relevant according to the current times.

The annual report was presented by Dr Anil Gupta, Joint Secretary and the report on the annual accounts was presented by Er S.K.Gupta, Hony Treasurer which were followed by discussion. The members complimented the outgoing Executive Committee for record number of quality programs conducted during 2015.